1997 Zenith and the Card That Started This Blog

This box of 1997 Zenith football had been waiting for me for a long time. Not just waiting for some collector to discover it and open it, but waiting for me. It knew, somehow, that I could not find or afford it back in 1997, but that it would find me someday and inspire me to start this blog. It hid itself at the bottom of a case, then found a cozy spot in a back room as new products replaced it on the shelf. Long was it forgotten, until someone cleaning out old inventory happened across it and knew that the appointed time had come. The box went to eBay, as so many things do; it was there, late one night, that I discovered it and knew it was too good a deal to pass up. Even then, when the box came to me in the mail it had to be wrapped up and hidden under the Christmas tree. It had finally reached the collector it was destined for, though, as I found when I finally was able to open it!

While it may not exactly be the One Ring of Power (and it turns out I’m not a hobbit), what I found when I opened this box absolutely delighted me. For now I’ll keep you in suspense as to exactly what it was, but it was so cool that I said to myself, “Wow, I wish I had a way to share this with other people who would appreciate how amazing it is. I know, I should start a blog!” Thus, the 90’s Niche Football Card Blog was conceived.

As you might imagine with a set called “Zenith,” this was a premium brand when it came out. It had a fancy name (I think this is where I learned the word “zenith”), thicker than normal card stock, a very elegant base set, and some really cool insert cards. (Those inserts come into play in a big way here, by the way.) Here’s a quick look at the base cards: 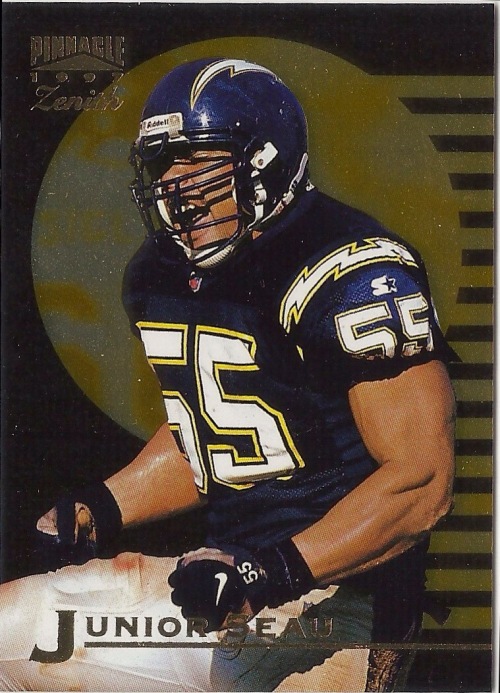 As I mentioned, the inserts are really cool, and that’s where my epic yarn from above leads us. As all collectors from the 90’s know, the scarcity of a good insert wasn’t based on serial numbers, but on the long odds of pulling that card. Here are the odds for this product: 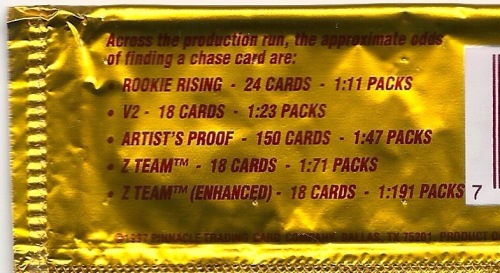 Out of the 36-pack box I opened, you’d expect to hit about three Rookie Rising cards and at least one V2 insert (all the better if that V2 is your all-time favorite 90’s player!): 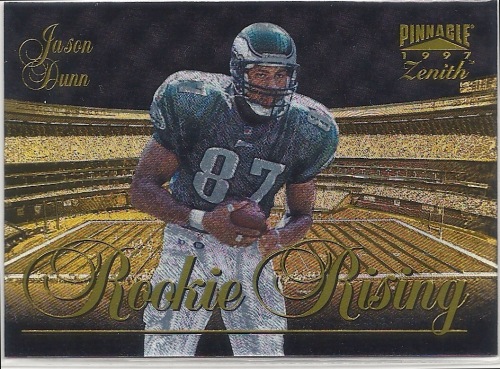 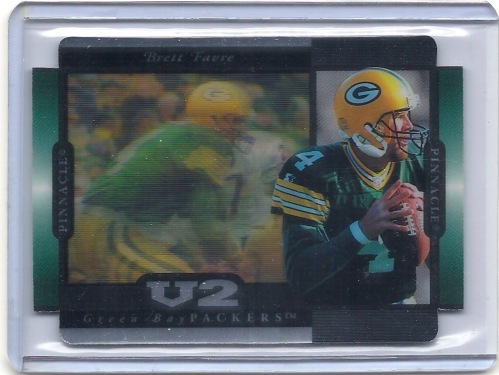 The V2 card features not only my favorite player, but also one of my favorite 90’s gimmicks – motion cards. Tilting this one shows Favre turning to hand the ball off after taking a snap. The Rookie Rising inserts are beautiful cards, too, with the etched foil stadium background. Speaking of etched foil, about one in every two boxes will produce a Z-Team insert:

A Z-Team insert of the top wide receiver in NFL history? I’ll take it!

At this point, this has already been a great break. I’d be thrilled with what I’ve pulled so far, but there’s one more elusive chase card that only pops up about every five boxes… And that card looks like this: 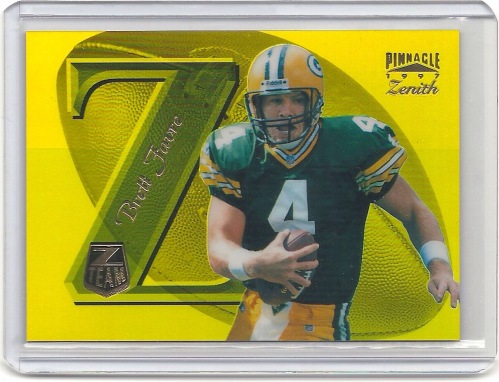 This was the touch of destiny. The 1:191 pack hit. The toughest-pull, top-level-insert, crown-jewel-of-this-product Z-Team Mirror Gold card. Of the 18 players in this set, I happened upon the card of my all-time favorite childhood player from my favorite team, who happened to be the reigning Super Bowl MVP that year! For a few, fleeting moments, I was 11 years old again when I saw this card. The Packers had just won a Super Bowl for the first time in my young life, and here was my childhood hero, in shining, holographic, mirror-gold glory, fresh from a gorgeous gold foil pack. Wow.