My sentimental post about going to this show ran a little long and had only one measly picture, so here’s a show-off post of the spoils of my journey.  (I’ll make sure to point out the 90’s cards to, you know, establish relevance to the blog here.)

The first thing I bought, figuring I would need something to carry my new cards in, was this box.  The 800-count size turned out to be rather awkward and ungainly, but these are always good to have around.

The first thing to go in the box was a couple cards from a singles bin – some Virginia Tech autos, a Packers jersey card and dual jersey featuring a bright orange Tennessee Volunteers swatch. 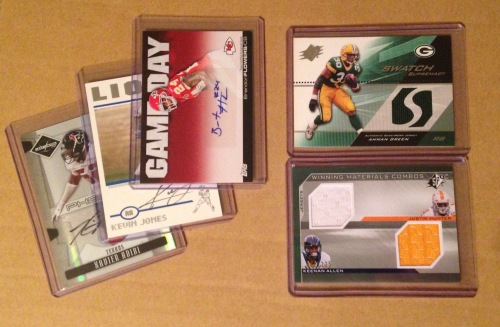 A couple more odds and ends. The generic looking Packers card is an old playing card, don’t know much else about it, just thought it was cool. Great thing about a card show is the little random finds like this!

Had to buy some unopened stuff, of course. I’d been looking at the Conference Greats box for a while, and couldn’t walk away from a good price on this one!

Already ditched the actual boxes these came in because my brother and I opened them in the car before we ever left the parking lot.  Fun stuff!

Finally, some 90’s stuff!  I was a little disappointed not to find more 90’s wax, but the two autos are pretty awesome!  I’m fairly certain they’ll make another appearance on the blog here.  (The packs came with the white card box to make the change easier when I paid for it. Haha.)

Lastly, some more fun, oddball kind of stuff.  The Star Wars cards are one of my favorite pick ups from the show, as mentioned in my previous post.  The “G Force” flag has some sort of spinner thing on the corner.  Again, goofy, but I enjoy it.  The Super Bowl program is just plain cool!

I post all this not just to show it off but to really illustrate the point of how much cool stuff there is at a card show.  I was sorely tempted by an Aaron Rodgers auto card I saw, framed and matted with a photo above it, but I had already spent [redacted!]. (Yeah, right, no way I’m putting in writing what I spent.  My wife reads my blog, too! LOL!)  Toying with the idea of bigger purchases is yet another fun aspect of a show, even if you end up leaving those things for someone with a little deeper pockets.  I had a blast at the card show, hanging out with my brother and just enjoying the experience of being around so many other collectors.  If you haven’t been to a show in a while (or have never been), I would strongly recommend making an effort to check one out!