I mentioned in part 2 of my blog post about opening a 2013 Totally Certified Football case that I pulled a disappointing number of redemption cards.  Lucky for me, Panini still honors them – even the “expired” ones!  In fact, I’ve already received the first card from them.  (Bravo, Panini!)  This was one of the big names from that draft, and I’m pretty happy to get this card, even if the star power here has faded since 2013.  Still, a nice card and a very presentable autograph. 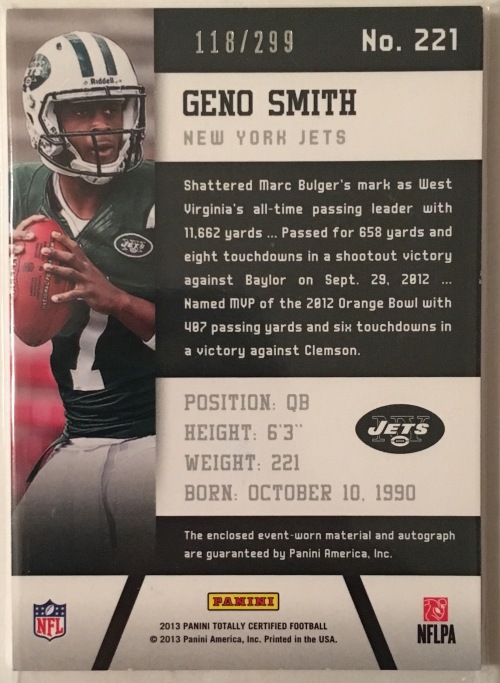 In the first part of this post, I showed (almost) all of the various non-auto jersey cards I pulled from my first full case bust.  There was some neat stuff, but nothing too spectacular.  I saved the best for last, but first – the worst.  This was sort of the height of the “redemption era,” and this case was full of them. Boo. Hiss. (Update: I’ve actually already received the Geno Smith jersey auto from Panini!)

I go to that low point, though, so we can turn around and head for the heights of hobby glory that came from this case.  First off, the base rookie autos.  Big names were all jersey autos in this set, but there are some pretty solid defensive players here. 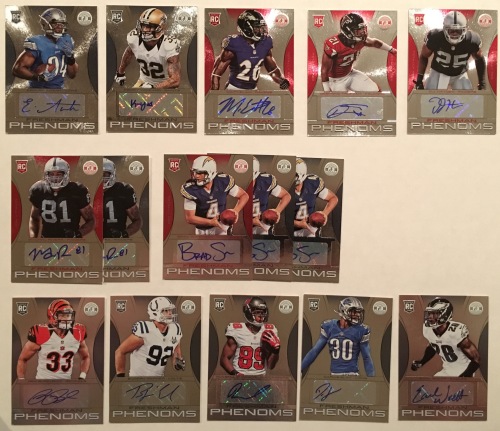 Next up, the rookie jersey autos that were live in the box.  These are box hits (in a 12 box case), which shows the number that were redemptions. (#SadFace) Most of these would have been hits to celebrate back in 2013, especially the EJ Manuel.  At least it’s a fun time capsule back to a few years ago.

Now to the cards that apparently only come around once a case.  The base set has blue, red and gold parallels, with the gold numbered out of 25.  While his playing days may also be numbered, I was happy with this gold pull. 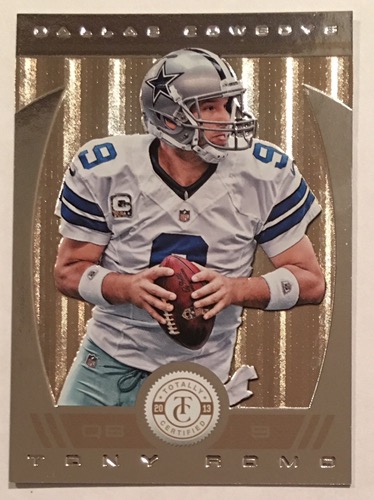 I pulled one vet auto, also numbered out of 25.  Again with the look-back to three years ago, Kaepernick was a hot commodity in the hobby.  Now he’s fighting with Blaine Gabbert to sit for whole games instead of just the anthem.  (Yes I know the pic is upside-down.  Pardon my politics, but I’m protesting him.  There is an ironic red, white and blue motif to this card, though.) 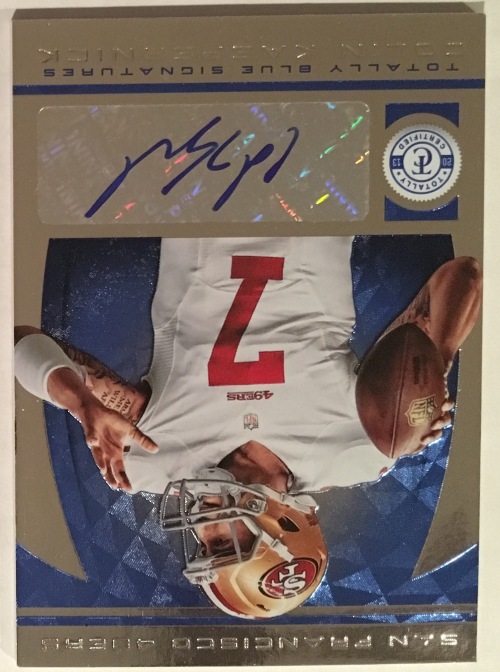 Like the Back to the Future movies, these last two cards take us even deeper into the past.  These were the two cards I mentioned in part 1 of this post that came from the same box in this case.  Really picked it up out of a lull in the case in a big way!  First off, the best of the Stitches in Time cards – a quad patch relic of four guys who combined for over 43,000 career rushing yards.  (That’s over 24 miles!)

Once again /25, this would be hands-down my favorite card from this case, except that about two packs later…

…this bespectacled beauty burst forth from behind some base cards! (#Alliteration)  Hall of Fame QB, crucial member of the only perfect team in league history, and a guy who played well on Thanksgiving in 1977.  As I turned the card over to see exactly how well he had played in that game, a small, silver stamp caught my eye. 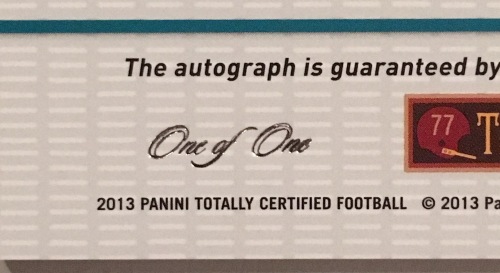 WHAT?!?! WHOA! YESSSSS!!!! (I actually said these things in all caps, of course.)  Then I just sat and stared at the card for a minute.  It’s not the first one-of-one I’ve pulled, but definitely the best.  I love the ornate script “One of One,” too.  What I read in those three shiny words is not just “Meh, there’s only one of these,” but rather (in a fancy British accident), “Our congratulations on having acquired the sole and only specimen of this particular piece to have been brought into existence! Good show, good show!”

Tagged as first case, one of one, totally certified

This is another one to add to my hobby baby book – my very first time busting an entire case of cards.  It came just a few short decades after my first box of cards, too!  I had been watching this product on clearance from Dave and Adam’s website, thinking about buying a few boxes, when it dawned on me – I should just spring for an entire case!  This was an exhilarating sight for me when it showed up:

Carefully cutting open the “Panini” tape revealed the top two of the stack of twelve whole boxes, each with six packs and a hit per pack.  72 total hits awaited me, and I was eager to see each and every one.  My wife jumped right in to help open them, too! 🙂

Busting a whole case is definitely a rush, but it can get just the tiniest bit monotonous.  If you go a box or two without a big hit, or where the box hit is a redemption, some of the excitement wanes.  I hit this point about halfway through, but then I opened a box (maybe box 8 or 9) that completely blew my mind! More on that one in part 2 of this post, though.

The basic hit in this set is the vet jersey card.  Including parallels, I picked up two per box.  Here are the base red ones.  A couple pretty big names with Romo and Dalton, and all around solid players. I did get one dupe, though.

The parallels were fairly exciting, with two golds and a few blue ones.  Another Romo in the blue.  The golds are nice, especially the Mathews patch.  I’m disappointed that the Kerrigan was a plain white swatch, even if it’s from a jersey number.

There were also rookie jersey cards.  This class has turned out to be pretty weak, but back in 2013, at least the top three would have been pretty decent ones.

The last category of jersey cards are the “Stitches in Time” cards.  These are some of my favorites in Totally Certified. There are single, dual and quad jersey cards of notable players.  The duals and quads usually have some connection between the players – same team, same college, or just same position.  Pulled a couple pretty good ones here, in my opinion. I did pull a quad (relic, not leg injury), but that will be in part 2.

Tune in next time to see the autos and the biggest hits of this case!