This probably seems like kind of a random card to most people. Sure, it’s a cool 90’s parallel from a great set, but it’s also a player whose biggest claim to fame is the ignominious distinction of catching Ryan Leaf’s first TD pass. (Those were pretty rare, though, I guess!)

Still (pun intended), this card has a lot of awesome going on for me. First off, well… it’s a cool 90’s parallel from a great set. More importantly to me, though, it’s a player from my beloved Virginia Tech Hokies. A player, in fact, who was the hero (and MVP) of what was then the biggest win in school history – the 1996 Sugar Bowl victory over the storied Texas Longhorns! GO HOKIES! (This is why I’m working on a master set of every Bryan Still card made during his career.)

It’s serial numbered 49 out of 50, too, in an era when “out of 50” meant “super-duper rare.” I like how the foil stamp on the back even includes the name of the parallel set. 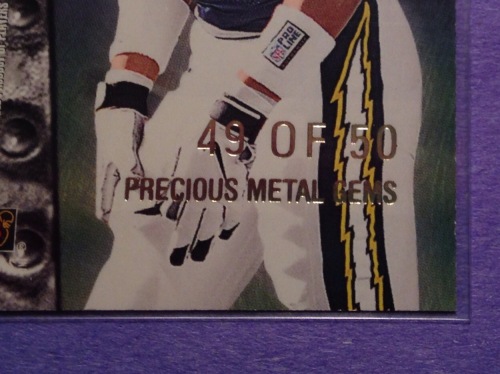 There’s yet one more bit of intrigue here, though. If you look closely, you’ll see Still is wearing two different shoes, one Nike and one Adidas. Bizarre, right?

The thing is, one of those is not his shoe at all; it actually belongs to the defensive back trying to cover him. The card designer highlighted the wrong leg, but it’s a natural enough position that you’d almost never know the difference. That subtle error gives this card a whole new layer of endearing novelty to me.